The Art of Hearing Heartbeats by Jan-Philipp Sendker

The Art of Hearing Heartbeats is a book review with sections of the book selected to give the reader a sense of the beauty of the book. 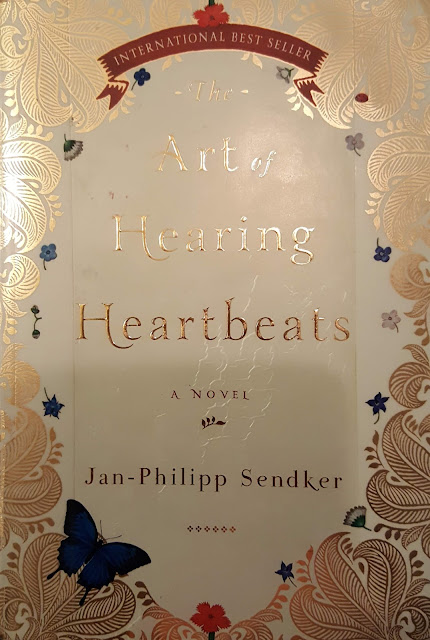 This book is poetry set to a story.  First, I listened to the book on audio tape.  There was such a richness that I needed to read the text to catch each phase with my eyes and imagination.  It is a story that begins in the USA with a lawyer and his family and comes to conclusion in Burma.
Julia comes to Burma to find the answer to her father’s disappearance.  She hears the story of her father, Tin Win, (Teen Ween) from a Burmese man named U Ba.  When Tin Ween was young, he became blind from cataracts and a friend, Mi Mi helps him view the world.

Page 145 Tin Win took no pains to hide his jubilation.  They were squatting again by the side of the street, and he could hardly keep still.  Mi Mi had opened the door a crack.  She had let a shaft of light into his darkness.  He would have liked nothing better than to run off with her then and there.  To investigate every tone, every sound, every noise that he could find.  He had learned his first word.  Now he knew the heartbeat of a chick in the egg, and eventually he would discover how to recognize the wing beats of a butterfly, why there was gurgling all around him—even when there was no water in the vicinity—and why even in a dead calm he still could hear a rustling.  With Mi Mi’s help he would solve one riddle after another, and in the end, perhaps a world would emerge.
“Mi Mi,” asked Tin Win, “why didn’t you want to look into that nest by yourself?”
She took his hands and laid them on her calves.  Tin Win had never felt skin so soft.  Softer even than the moss in the woods that we had previously so loved to stroke his checks against.  His fingers moved slowly down her legs to her ankles, which were slender, but then oddly misshapen.  Her feet were immovable.  They were stiff and turned inward.


This passage lets me, the reviewer hear the children singing in the mountainside.  The voice in first person is Julia with U Ba responding.
Page 233 In the distance I heard singing.  Several voices, faint and barely reaching my ear.  A wave melting into the sand before even washing over my feet.
I listened hard into the silence, but heard nothing, picked up the song again, then lost it, held my breath and sat stock still until I heard the notes again, somewhat louder now.  Loud enough that I would not lose track of them again. It could only be a children’s choir untiringly repeating a melodic mantra.
“Is it the children from the monastery?” I asked
“Not the ones from the monastery in the town, though. There’s another in the mountains, and when the wind is right, their song drifts down to us in the morning.  You are hearing what Tin Win and Mi Mi heard.  It sounded no different  fifty years ago.”

Page 234 Music, my father often said, was the only reason he could sometimes believe in a god or in any heavenly power.
Every evening before going to bed he would sit in the living room, eyes closed, listening to music on headphones.  How else will my soul find rest for the night, he had said quietly.

Page 240 It was oddly familiar to me.  I closed my eyes and tried to imagine my father walking along the road.  I was startled by the many and varied noises I suddenly heard.  Birds. Grasshoppers. Cicadas. And unpleasantly loud buzzing of flies, the distant barking of a dog.  My feel got mired in the holes and ruts of the earth.  I stumbled but did not fall.  It smelled of eucalyptus and jasmine.

Page 243 “Why? Love has so many different faces that our imagination is not prepared to see them all.”
“Why is it so difficult?”
“Because we see only what we already know.  We project our own capacities—for good as well as evil—onto the other person.  Then we acknowledge as love primarily those things that correspond to our own image thereof.  We wish to be loved as we ourselves would love.  Any other way makes us uncomfortable.  We respond with doubt and suspicion.  We misinterpret the signs.  We do not understand the language.  We accuse.  We assert that the other person does not love us.  But perhaps he merely loves us in some idiosyncratic way that we fail to recognize. I hope you will understand what I mean once I have finished my story.”
Page 307 The sun would be coming up soon, Tin Win knew from the song of the birds.  He laid his head on her breast.  He had not been mistaken.  Her heart sounded weak and weary.  It was ready to stop
He had come in time. Just.

Page 325 “Death,” U Ba had said, “is not the end of life, but a stage thereof.” He would not have had to explain himself to a single person there.
I hung back, motionless, in one corner.  Darkness had settled over the yard.  Through a crack in the wall I could see that the whole place was now illuminated by candles.


This story sent me to another land of honor, love, beauty.  I hope that you may have the divine delight to read or listen to The Art of Hearing Heartbeats by Jan Phillip Sendker.