The Holiday Adventures of Oreo

The cat came over the mountain to see what she could see in 2005 when we went hiking in Phoenix, Arizona. 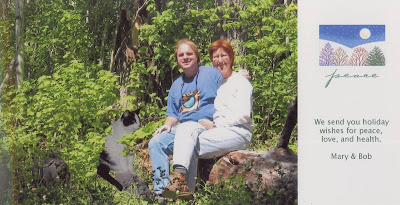 It appears that Oreo was bigger than life in 2004 when she went hiking with us on the Superior National Hiking Trail near Grand Marias, Minnesota.  She still holds that larger than life image in our minds.

In 2006, we traveled to Brazil to visit our friends, Mary Boutain and Colleen Haas.  Of course, Oreo was curious about the sights as well.

And once again, some would say that she was larger than life with these adventures.

Oreo stayed home in 2007, and Mary Lee and Bob hung out with her on the Christmas tree.  (Oh, and did you notice my name--yup, unofficially took back Mary Lee in 2007 and it has stuck ever since.  I was called Mary Lee when I was a little girl.  It makes me happy to use that name now.)

Bob and I took a vacation in the Porcupine Mountains in the Upper Peninsula of Michigan in 2010.  Oreo liked the view from up there.  (I can't remember what happened in 2008-2009.)

We had some fun biking adventures in the Trempealeau National Wildlife Refuge.  Oreo liked to sniff the air.  This was 2012 holiday greetings.

Kayaking became a very fun sport for us in 2013.  I won the kayak that I'm paddling at the Frozen River Film Festival.  Very lucky!

We were checking out the Redwoods in California.  Bob and I celebrated our 15th wedding anniversary in 2015--a crystal year.  We took in lots of ocean views.  And Oreo had to check out all the interesting smells.


Oreo took a really big adventure this summer and was gone for a day and a half.  We were not sure if we'd see her again.  Luckily, a kind woman took her to the Humane Society.  We had left a sign about Oreo missing and the kind people at the Humane Society cared for her until we could come.  She was on her last hours, and did not take in any more water or food.  She could not walk very well, and was panting and her breathing was labored.  When we took her to our vet, he recommended that we let her go.  And we chose to do that.  We buried Oreo on July 24, 2015.  I painted a memorial stone on her grave.  What a great cat; who was so very loved by all of us.